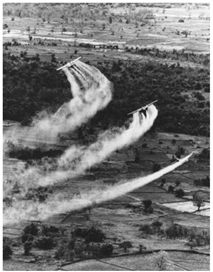 The best evidence is that Agent Orange killed lots of trees but no humans.

Way back in 1985 the EPA decided it wanted dioxin to be cancer-causing and made it so, labeling it a ”probable human carcinogen. ” Fifteen years later it upped the ante, concluding – to a round chorus of applause from the media and environmentalist groups – that the cancer risks for the most exposed people were 10-fold higher than it previously thought. Three years after, it strengthened dioxin’s label to ”carcinogenic to humans. ” And on Tuesday . . . one big fat fly from the National Academy of Sciences (NAS) plopped into the ointment.

Indeed, the recommendations of the NAS’s National Research Council (NRC) review of the EPA’s latest draft report on dioxin could – or at least should – turn the entire cancer-rating system of the EPA and other agencies on its head.

Dioxin is created as an unintentional byproduct of certain industries and processes, including burning trash, land application of sewage sludge, coal-fired utilities, and metal smelting. It was formerly common in trace amounts in herbicides including Agent Orange, widely used in Vietnam. As a result, we all have carry dioxin in our bodies.

Although dubbed ”the most dangerous chemical known to man, ” incredibly this was based entirely on the acute toxicity (poisoning) to a single species of animal – guinea pigs. In humans incredibly massive doses have never been shown to cause any long-term damage besides severe acne, as was the case with Ukrainian President Viktor Yushchenko in 2004.

The cancer accusations didn’t come along until much later and now the Veteran’s Administration makes "presumptive" payments to Vietnam vets with certain cancers regardless of evidence of exposure to Agent Orange. That’s also notwithstanding that an ongoing study re-evaluated every three years of those with by far the highest levels of exposure have indicated no increased risk.

The NRC committee was split on whether the available evidence met all the criteria for classifying dioxin as "carcinogenic to humans" under the new guidelines, but it was unanimous in agreeing that dioxin should at least be considered "likely to be carcinogenic to humans." That would seem to at least justify the EPA’s original 1985 decision but doesn’t.

That’s because while it’s long been accepted that for acute toxicity that ”the dose makes the poison ” the EPA uses as a rule for all potential carcinogens that if exposure to a rat of something at a level of, say, a quart a day for 30 years is cancer-causing then exposure of a hundredth of a gram a day for one week must also be carcinogenic to humans. No matter that FDA doesn’t advise against women taking a daily iron pill because if they took 100 daily they would die.

Dioxin levels in Americans have dropped dramatically and continue to do so.

It was this EPA assumption that the National Research Council directly challenged, concluding the ”EPA’s decision to rely solely on a default linear model lacked adequate scientific support. ” It said compelling new animal data from the National Toxicology Program – released after EPA completed its reassessment – when combined with substantial evidence that dioxin does not damage DNA, is now adequate to justify the use of nonlinear methods for estimating cancer risk at relatively low levels of exposure.

In other words, the EPA can’t just choose a formula because it’s convenient and serves its political ends. It can’t ignore the results of myriad animal and human studies and the determination of how a certain chemical affects human cells in favor of simple mathematics. Nor can it apply that formula because it favors environmentalist groups who make a living by terrifying us into believing that a single molecule of this or that threatens the existence of ”peoplekind. ”

The NRC doesn’t go so far as to say the linear model can be sent to the trash compactor. It may have applications in some cases. In fact, the NRC report merely restates conclusions from the EPA’s own ”Guidelines for Carcinogenic Risk Assessment, ” issued last year. ”Both linear and nonlinear approaches are available, ” the assessment states and ”In some cases, they may be combined in a way that best represents human cancer risk. ” The problem is in getting the Agency to apply the guidelines it devised.

So where does this leave us regarding both dioxin and other potentially carcinogenic substances? Given the poor evidence for low-dose carcinogenesis of dioxin in humans and that according to the EPA dioxin emissions in the environment have been reduced by 92% since 1987 it would seem time to call off the dioxin dogs. That includes both new government regulations and the environmental groups demanding them.

For every other would-be cancer-causer, we need something besides the knowledge that it kills a certain kind of rat or mouse or hamster when given massive doses. That’s just not enough anymore to ban valuable chemicals or to leave tens of millions of Americans in fear that they and their children will sprout tumors like mushrooms because ”The Man ” wants to stuff his pockets and doesn’t care who he sickens or kills in the process.